Negative interest rates in Europe: is there an issue?

We are living in a strange time… France, with a debt equal to 100% of its Gross domestic product, can now borrow at 10 years with negative interest rates.

In other words, lenders today have no better investment option than to voluntarily lose money.

The belief that nothing changes comes from either bad eyesight or bad faith. The first corrects itself, the second fights. (Nietzsche)

Who charges these negative interest rates in Europe?

Who are these lenders desperate to the point of knowingly losing on the invested capital?

First come French pension funds. The latter have the obligation, in order to guarantee the reimbursements of insurance contracts which will expire in the future, to replace the sums collected in investments considered as “risk-free”.

Then we find the banks, which must invest the difference between deposits received and loans made to customers without risk. Finally, ETFs or other passive managers, who must blindly follow their benchmarks.

And yet, we know that the African continent generates, for short maturities of less than five years, returns on bond investments in sovereign debt of the order of 6% in US Dollars and more than 10% in local currencies. However, we see that asset beneficiaries are largely unaware of this offer … There is reason to ask serious questions. 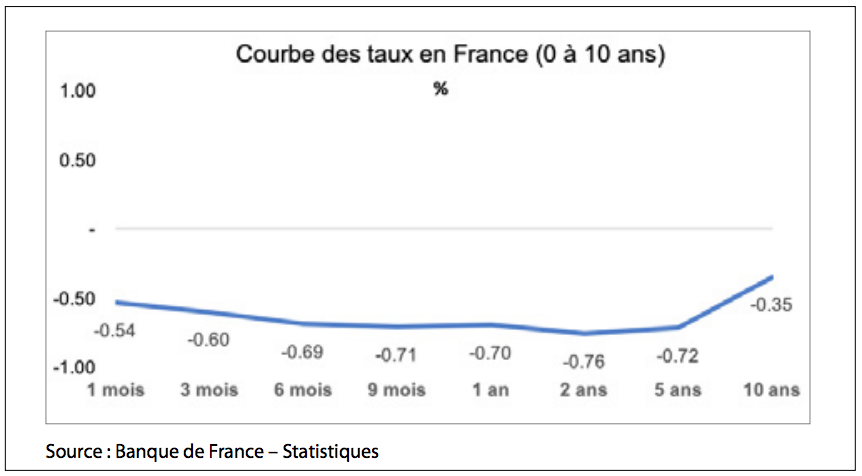 For their part, Switzerland, Germany and the Netherlands can borrow at negative rates over 30 years! Japan, Finland, Austria, Sweden and Belgium can also borrow over 10 years and still make money.

According to the Bloomberg Barclays Index, the total public debt negative interest rates exceed US $ 12 trillion, double the level of two years ago and rising sharply recently.

A situation due to the combination of 3 factors

First of all, inflation in developed countries shows no signs of recovery. In Europe in 2019, the inflation rate is not expected to exceed 1.3%, with oil down 15% since the start of the year.

Then, since 2009, many equity markets have experienced strong growth and are at their highest historical levels. However, asset beneficiaries are very afraid to relive the crashes of 2000 and 2008, after more than ten years of positive economic performance.

Finally, the risks of recession are now at their highest, due in particular to the escalation of the USA / China trade war since early May 2019. In the United States, the (positive) 10-year rate has just fallen below 1.5%.

Risk aversion is therefore topical . What obviously benefits gold , whose demand and price have risen sharply since last May.

There is no doubt that geopolitical risks are also very strong. With growing tensions in Iran, Hong Kong (China’s gateway to the world) and of course in Europe, in the North with the Brexit and in the South in Italy.

But have we ever known periods without geopolitical risk? And to come back to the European economy, what’s going to happen ?

What if negative interest rates persist?

At this stage, and given the current context, we imagine three scenarios potentials:

In the short term, given the risks to growth and thanks to these negative interest rates, Germany should let go of the fiscal ballast and allow an increase in investment budgets in Germany and more generally in Europe.

In the medium term, Europe could resemble Japan. It has been in crisis since the bursting of the speculative bubble in the early 1990s. Growth, inflation and interest rates have been there for over 25 years at ridiculously low levels.

We further suspect that this scenario would be seen as the least worst by European “leaders”. They are indeed thinking of solving their demographic problem by importing labor. What Japan has not yet wanted to do.

2. A resumption of inflation?

This could certainly happen for reasons probably external to Europe. But Italy and France remain heavily indebted. So this upturn in inflation could not automatically be accompanied by a rise in negative interest rates in Europe.

In addition, this scenario would mean a strong loss of purchasing power and the yellow vests would turn completely red!

An unlikely scenario, which could come from Italy but also from Germany, or even both at the same time. The Italians renouncing to pay their debts and the Germans refusing to pay for the Italians.

It would be a hell of a fireworks display, which the Americans would have great difficulty controlling this time.

As a reminder, it was the Americans who pushed Europe to unify in the 1950s and 1960s. In order to promote the development of their exports and their “culture” (Hollywood, burgers, etc.). All while ensuring that this European bloc is drawn up as one man against the Soviet Union, the enemy of the time …

Our conclusion on negative interest rates in Europe

In the end, for the individual saver, negative interest rates lead to “euthanasia of the annuitant”, a formula dear to Keynes.

Individuals, especially retirees, have saved for decades. Yet they find themselves trapped and no longer receive interest on their bank deposits. It is in fact a disguised tax, allowing governments to take on even more debt, at the expense of savers.

And this, added to the misuse of public funds, can ultimately only increase tensions between peoples and their governments.

Read here another of our analyzes:
[Jul. 2019] Mauritius Leaks – An investigation that raises questions …